In his review of the film in The Globe and Mail, Geoff Pevere says “Paolo Sorrentino’s The Great Beauty is an utterly ravishing portrait of listless luxuriance, a fantasy of decadent wealth and beauty that evokes Fellini’s La Dolce Vita by way of Baz Luhrmann.”

A Great Beauty is a complex film in part because Italian director Paolo Sorrentino is able to invest each one of the many vignettes in the film with a subtle and ironic tone of the profoundly disillusioned, intelligent and waspishly witty narrator Jep Gambardella, played by Toni Servillo. It is not until late in the film that we understand the reasons for this disillusion.

Pevere’s quotation sums up much of the critical response to this wonderful film. But the film is more than just a ravishing portrait. It is a journey in search of meaning for both the main character and for the audience. Jep has already completed his search for meaning and has found nothing but he is gracious enough to provide the audience with a guided tour.

As Jep conducts the audience through the scenes of great beauty, he invites the audience not only to make sense of each scene, but also to try to find some meaning in his life. But like Jep, we are unable to. We watch a series of beautiful scenes that are disconnected not only from Jep but also from each other.

Throughout the film, Jep reflects on both his present and past life. He has written one highly successful and acclaimed novel but since then, despite the richness of his life in Rome, he has been unable to find anything to write about. He is clearly a man of great sensibility, intelligence and insight but he has only been able to use this in fleeting instances. He is able to write occasional magazine pieces but is unable to sustain the effort to write another novel.

Sorrentino takes the audience on a guided tour through the high society Rome that Jep inhabits, a world that Jep is unable to shape into a coherent artistic vision. With Jep as tour guide, we see much of Rome through Jep’s world-weary eyes.

The scenes that Jep moves through are beautifully photographed and many resonate with the subtle, ironic humour of Jep’s observation. But while the audience is able to appreciate and enjoy each scene, the overall effectIs all this series of beautiful but disjointed experiences.

What Sorrentino is saying is: “Jep will take you on a guided tour of his past and present. He has been unable to find any meaning in these experiences. See if you can do any better.” The audience is left with the same existential angst at the end of the film.

To help the audience understand the journey that they take with Jep, it is necessary to establish his perspective on the experiences that he will lead the audience through.It is one of almost Olympian detachment.

The Olympian detachment of Jep Gambardella

In an early scene, Jep, who is a journalist on a fashionable magazine, interviews a poet who has earlier run quite deliberately, full tilt and naked into the column of an aqueduct.

The naked poet runs into the aqueduct column

In the interview she claims her inspiration comes from “vibrations”. Jep presses her to define what “vibrations” are. The woman falters but Jep persists, not to seek elucidation, but to humiliate the woman. She rages that she is not used to being interviewed by people of Jep’s stature and threatens to complain to his editor. Jep advises her not to mention stature in her letter, as the editor is a dwarf. The editor is amused by the reference and tells Jep that the column of the aqueduct is made of polystyrene. The incident is significant because it establishes Jep’s informed, intelligent and world-weary view of the world. It also separates him out from the pretension and superficiality of much of the world that he inhabits. It’s an almost Olympian detachment.

In the gathering of friends, the historian for the Communist party is disclaiming on the nature of art. It’s fatuous nonsense for the most part and suddenly Jep turns on her and, in a scathing appraisal of her pampered and lavish lifestyle, completely destroys any vestige of credibility for woman may have. Even his friends are uncomfortable at the savagery of the attack. But it is a crucial scene, like the one with the poet, because it separates Jep from the hypocrisy and cant of many of the film’s minor characters.

Later in the film, he watches a child prodigy throwing painted canvas on the wall fascinated, not so much that a large audience is watching her and but that she makes millions of dollars from her activities. But the scene does not hold him for long and, before the painting performance is finished, he moves on.

The child protégé at work

This savage intelligence is only part of Jep’s make up but it helps shape our responses to the many scenes he observes but does not comment on.

In many of the scenes, Jep is simply a detached and somewhat jaded observer. This detachment also typifies his personal and sexual life. When he first meets Romana, the stripper, he is initially detached and jaded.

But she piques his interest and he becomes involved and has a desultory affair with her. In one scene, Jep asks her to describe the first time she made love. In a complete non sequitur, we see a man performing intricate juggling tricks with a soccer ball. Cut back to Ramona who describes her first sexual experience as extremely unsatisfying and that, at its conclusion, her lover had jumped out of bed to begin the soccer ball performance. It’s funny, bizarre and touching but when she asks Jep to describe his first experience, he hesitates.

The memory is too painful for him to repeat. The affair with Ramona does not develop and the flashbacks to Jep’s first love, Elisa, reveal the painful memory and loss of his first experience of great beauty. He was 18 and she was 20 and their affair ended almost as soon as it began and Elisa marries someone else.

Nearly fifty years later, Jep learns that Elisa has died and that she had written in her diary that she had loved him for all that period. There is a beautifully shot and poignant scene in which Elisa’s bereaved husband, who was just read her diary, and Jep, who is also just learned of its contents, both realise that a large part of their life has been lost.

The film also works at another level, that of social commentary. This is seen in the brilliant sequence of scenes involving the Cardinal who is reputed to be the greatest exorcist in Europe but have only appears to be interested in recipes for cooking rabbit and the old wizened nun Santa Maria. The sainted nun has come to Rome and is given to speaking much like Chance in Being There: “You cannot experience poverty, you can only live it,” and “Do you know why I only eat roots? It is because roots are important.” It’s both bizarre and apposite.

The Cardinal and the Saint

There is also a hilarious scene where the 104-year-old nun is standing in a garden providing a photo opportunity for groups of people who pose with her, each one rushed off the scene by her officious assistant. The scene with the child prodigy throwing paint is a commentary on the artistically bankrupt values of contemporary Roman society. And then there are the numerous wonderful party scenes attended by all the beautiful people. In one of them, Jep comments, “My train dances are the best in Rome because the train is going nowhere.”

He joins the train dance for a while but attaches himself and sits next to a young couple who invite him to watch them making love. He does so but soon becomes bored and stares at the ceiling.

As the final credits roll, the film ends with camera drifting languidly down the Tiber. It’s a beautiful scene replete with the ennui that has pervaded the whole film. 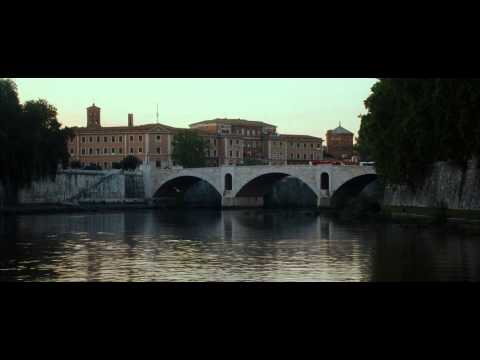