When Len (David Bradley) asks Harry (Michael Caine) “Have you ever killed anyone?” and Harry responds with “You can’t ask me that”, we see a man who has emerged from the darkness of his time as a Marine in Northern Ireland.

He now spends his life playing chess with Len in his local pub. He has locked all his experiences of Northern Ireland deep inside. We see a glimpse of it in the scene where he tortures the young gang member. 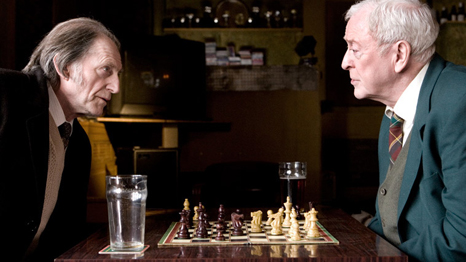 Len and Harry play chess in the local pub

There is long slow buildup in the film that shows the brutal decline of the estate that Harry lives on and its impact, not only on Harry, but also on the lives of everyone who lives there. The estate is dominated by a teenage gang that terrorizes the locals and against whom the local police appear powerless.

Harry is unable to get to the hospital in time to see his dying wife because he is frightened to use the subway where the gang members attack and harass the passers-by. He walks the long way round and arrives to find that his wife is dead. This is the same subway where the gang will later murder Harry’s friend Len.

There has been a period of light in Harry’s life when his wife and daughter were alive. But now all of that is gone. But Len’s murder at the hands of the local thugs and Harry’s confrontation with a mugger, whom Harry kills, finally pushes him to a point of no return. 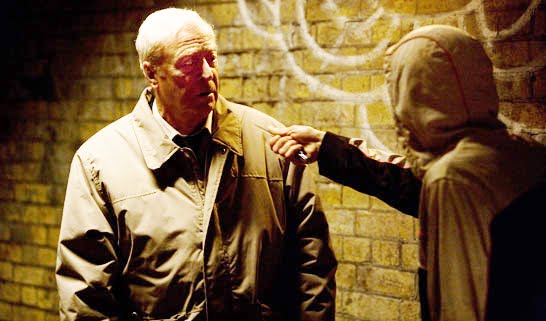 Harry confronts the mugger. In a struggle, the knife becomes embedded in the mugger’s chest

Harry is Everyman and, like Everyman, there is a deep river of violence flowing inside him. Harry’s decision to become a vigilante is a very conscious one. He seeks out local drug and gun dealer, Stretch played brilliantly by Sean Harris. 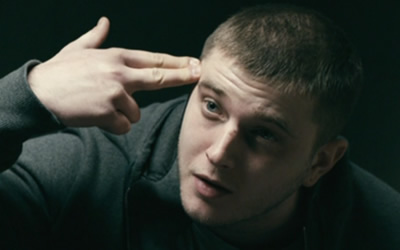 The visit to the drug dealer is Harry’s descent into hell. In a chilling scene of escalating threat, Harry winds up killing both Stretch and his accomplice.

The scene is pivotal to the film. Harry has mortally wounded Stretch and he stands over the dying man and says:

I don’t reckon you’ve got long. Seen that before. Gut wound. The slug’s probably torn right through your liver. Mate of mine in Ulster got caught in sniper fire. Bullet blew his inside out. He screamed for a good 10 minutes. We couldn’t send a medic in, the section was too hot. So we all took cover… and watched him die. I’ve never told that… to anyone… you should’ve called an ambulance… for the girl…

He then shoots Stretch, as he lies, bleeding to death, amongst his marijuana crop. It’s premeditated and brutal. However angry Harry may be feeling, he doesn’t show it. But he doesn’t take any of the pleasure that is inherent in Harry Callahan’s “Go ahead, make my day”.

Now armed and dangerous, Harry sets out to seek retribution for Len’s death. This is the turning point in the film, which now explodes into graphic violence. But it is at this pivotal point where the film falters. We sympathise with the implacable Harry’s quest for justice but we do this because the gang members are so irredeemably evil. 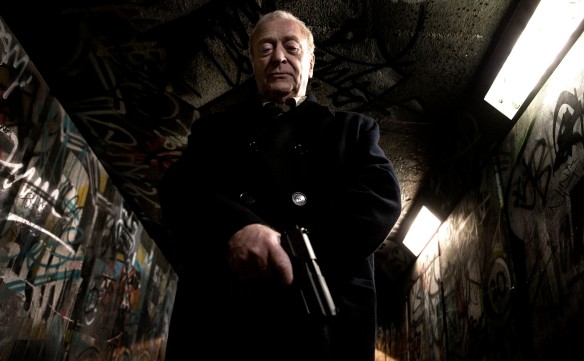 Harry has now returned to that dark place of the soul and of Northern Ireland.

The interview scene in the police station between the gang members and the police, but most particularly between Noel (Ben Drew) the gang leader and the two ineffectual police officers, DI Alice Frampton (Emily Mortimer) and DS Terry Hicock (Charlie Creed-Miles), is a chilling testament to the impotence of the police in the face of such intransigent evil.

We are left with no sympathy whatsoever for Harry’s victims but at the same time we have absolutely no insight into the price that Harry pays for his vigilante crusade.

Perhaps there is symbolism in the final scenes after the violence of the riot and the casual slayings that accompany it. The open areas of the estate, once dominated by the gang, are now safe but completely deserted. When Harry walks into the subway, now free of the gang members, the film goes to black. We fear that Harry may have returned to a very dark place.

2 thoughts on “Harry Brown: A journey back into darkness”