There is a group of Edward Hopper paintings that is an intense examination of the human condition. In these paintings, Hopper examines people poised at intersections, both physical and psychological. If his paintings were pictures drawn from a story, they would be the point at which the narrator pauses for breath, a point that gives the viewer (or the listener) no indication of where the narrative is heading. These paintings are characterised by a unique psychological and artistic intensity.

The yachts that Harper has painted off the coast of Maine stand in contrast to this group of paintings.  Perhaps the best known of them is Groundswell. 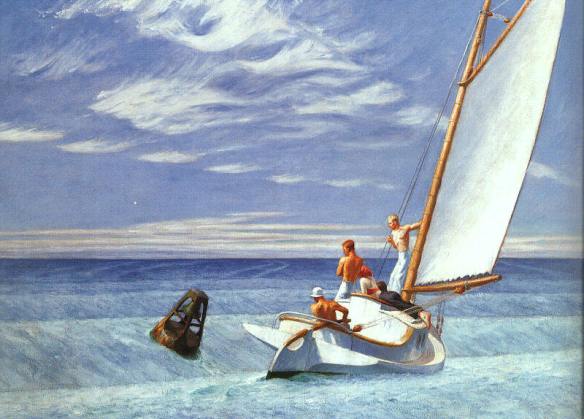 This painting has links both the to thematically and structurally to other Hopper paintings: A group of people  are looking at something that the viewer can’t see. It doesn’t seem to be the buoy cresting the wave, it’s something in the water, but what, we cannot see.  Certainly, the painting is dominated both structurally and psychologically by the physical positioning of the people on the yacht.

Two other paintings, Sea Watchers and People in the Sun, feature subjects staring intensely at something the viewer cannot see.

Sea Watchers and People in the Su:, Looking at Something That We Can’t See

In Groundswell,  the focus and structure of the painting draws us into the painting rather than out of it, The viewer’s eye is drawn down along the line of sail, a large block of  variegated white light that anchors the painting, to the figures who lean forward and stare into the water.

Hopper’s treatment of light in this painting is subtler and more masterful than in  Sea Watchers and  People in the Sun  where the subjects are positioned on and back grounded by, large slabs of light. Here there is a subtle contrast between the white reflected light of the yacht and the sail whose shadow reflects a blue of the sea. The pool of bright reflected light which frames the yacht fades to a deeper blue at the horizon and the strangely rhythmic patterns of the clouds echo those in Lighthouse at Two Lights .

It’s also interesting to see how Hopper developed the idea of the art in this painting from one of his etchings.

It’s probably the same yacht, although it’s on a different tack with a smaller crew. But the etching is an interesting contrast, in that it’s a more realistic and less stylised portrayal than Groundswell.

Hopper achieves this more stylised effect by the way that he paints the waves that are regular congregations in the sea. The water in the etching is far more dynamic. All of this gives Groundswell are far more relaxed mood: it’s a celebration of summer and friendship.  Well almost, but the intense gaze of the crew of the yacht that hints at something interesting and possibly sinister in the water, is a counterpoint to this mood.

Edward Hopper: the Sunlight pictures (i)