Australia has sent elite troops to Iraq but it seems the Iraqis don’t want them.

The real situation seems to be somewhat different:

Iraq’s Foreign Minister, Ibrahim al-Jaafari reportedly said earlier this month that Baghdad was “absolutely against foreign military bases and the presence of foreign military forces”. “Yes, we did ask for help, but it concerned air cover,” he said. “The question of sending troops in was discussed several times and we were very frank and stated clearly that we are completely against the deployment of foreign troops on our territory, as it can cause justifiable fears and concerns among the Iraqi population.”

The Foreign Minister, Julie Bishop, won’t comment because it will “let the enemy know what we’re doing”. These are weasel words but they can be translated: “They don’t want us. We using the visa story as a cover for a policy that has gone badly wrong. It was never a good idea and it’s my job to cover up the Tony Abbott.” 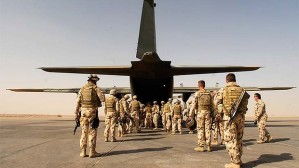 Australian troops fly out of Australia but not into Iraq