Clive Palmer looks as if his parliamentary status has been downgraded to “nuisance value only”. 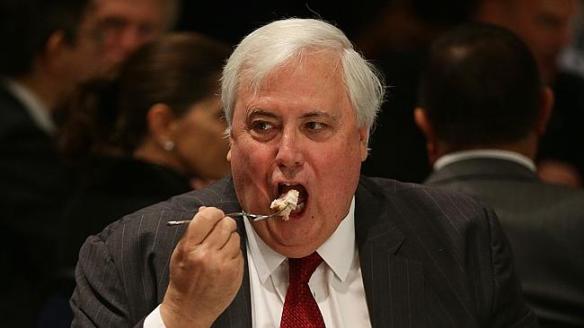 Clive Palmer: the dinner not the diner on the Direct Action legislation

He certainly made no impact whatsoever on the government’s plans to introduce Direct Action. From posing with Al Gore as the saviour of climate change in Australia, he now says that PUP will support the Direct Action legislation in Parliament. The best we can hope for is a sudden outburst of good sense on the part of the PUP senators.

Palmer certainly hasn’t made any impact on the government’s total and emphatic refusal to consider an ETS. He thinks that having an 18 month enquiry into the effectiveness of ETS programs is in some way committing the government to such programs.

The Direct Action scheme is the absolute antithesis of climate change legislation. It pays polluters if they’re prepared to make an effort to stop polluting. But why would they try if they’re making plenty of money emitting oxic gasses and destroying the environment?

The real tragedy of the way the debate has been shaping in Australia about what sort of scheme we  should have is that the question of the appropriate levels of carbon reduction has been completely ignored.

The problem with Direct Action is that it aims to reduce emissions by 5%. Not really worth the effort!

Europe appears to be taking a different approach EU leaders adopt ‘flexible’ energy and climate targets for 2030 and adopting a 40% target by 2030.

It’s a way off but at least they are starting to get the numbers right.

Even some big corporations are throwing their weight behind climate change initiatives.