Mr Hockey is claiming that as a result of articles, he has been “greatly injured, shunned and avoided and his reputation has been and will be brought into disrepute, odium, ridicule and contempt”.

He obviously wasn’t too concerned when his boss listed the top five ministers in the Federal Cabinet and omitted to mention the treasurer.  That looks like a fairly high grade shun.

The difficulty for poor Joe is demonstrating that the disrepute, odium, ridicule and contempt was brought about by the articles and not by the his failed efforts to get his first budget through Parliament, comments about poor people not driving cars, cigar smoking  and a vigourous exploitation of Parliamentary  entitlements. 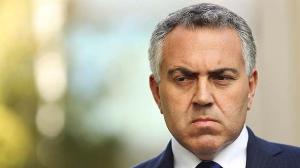 Joe is not happy about being shunned, injured and greatly avoided

One is reminded of the Pogo quote “We have met the enemy and he is us.”