If you really want to understand Richard III, it helps to read the preceding seven plays. They cover the Wars of the Roses which were fought between supporters of two rival branches of the royal House of Plantagenet, those of Lancaster and York.

The trouble started when Richard II (of the house of York) banished Henry Bolingbrook (of the house of Lancaster) , later Henry IV. Bolingbrook returned from exile and deposed Richard, breaking what many considered to be the natural line of succession. From then on it was on for one and all.

At the beginning of Richard III, Edward IV of the House of York has been restored to the throne with the deaths of Lancastrian King Henry VI and his son Edward Prince of Wales dispatched by Richard, Duke of York. In the final scene of Henry VI Part iii,  Richard presages the opening scene of Richard III  with a soliloquy over Edward’s dead body

Richard:  The midwife wonder’d and the women cried
‘O, Jesus bless us, he is born with teeth!’
And so I was; which plainly signified
That I should snarl and bite and play the dog.

Clarence, beware; thou keep’st me from the light:
But I will sort a pitchy day for thee;
For I will buz abroad such prophecies
That Edward shall be fearful of his life, 3085
And then, to purge his fear, I’ll be thy death.
King Henry and the prince his son are gone:
Clarence, thy turn is next, and then the rest,
Counting myself but bad till I be best.

The opening scene of Richard III must be the most remarkable entrances of a villain in all of English literature.  Richard carries on with all his venom and self-loathing from where he left off in Henry VI.

Richard:  Now is the winter of our discontent
Made glorious summer by this sun of York;
And all the clouds that lour’d upon our house
In the deep bosom of the ocean buried. 5
Now are our brows bound with victorious wreaths;
Our bruised arms hung up for monuments;
Our stern alarums changed to merry meetings,

And therefore, since I cannot prove a lover,
To entertain these fair well-spoken days, 30
I am determined to prove a villain
And hate the idle pleasures of these days.
Plots have I laid, inductions dangerous,
By drunken prophecies, libels and dreams,
To set my brother Clarence and the king 35
In deadly hate the one against the other:
And if King Edward be as true and just
As I am subtle, false and treacherous,
This day should Clarence closely be mew’d up.

In what follows, Richard provides a masterclass in ruthless Machiavellian politics and Shakespeare portrays a towering murderous psychopath whose only motivation is the exercise of power and degradation of others. Richard wants to be king but his brother Edward is on the throne, Edward has two sons (Edward and Richard) and Richard has an elder brother (Clarence). That puts him fourth in line.

He is also opposed by members of the royal court. These are kinsman and allies of the king’s wife Lords Dorset, Rivers, and Gray. They also constitute obstacles to the Crown. He must bustle.

In the second scene of the play, we see Richard in full flight. He encounters the grieving Lady Anne bearing the coffin of her husband Edward whom Richard had murdered.  She is the first of many women in the play to attack Richard in the foulest of terms.

Lady Anne: Villain, thou know’st no law of God nor man:
No beast so fierce but knows some touch of pity

Vouchsafe, defused infection of a man,
For these known evils, but to give me leave,
By circumstance, to curse thy cursed self.

Fouler than heart can think thee, thou canst make
No excuse current, but to hang thyself.

Towards the scene and in a remarkable act of daring, Richard offers Anne his sword

Richard: And humbly beg the death upon my knee.
[He lays his breast open: she offers at it with his sword]
Nay, do not pause; for I did kill King Henry,
But ’twas thy beauty that provoked me.
Nay, now dispatch; ’twas I that stabb’d young Edward,
But ’twas thy heavenly face that set me on.
[Here she lets fall the sword]
Take up the sword again, or take up me.

Anne: Arise, dissembler: though I wish thy death,
I will not be the executioner.

Before the end of the scene, he has symbolically placed a ring on her finger.

Richard: Was ever woman in this humour woo’d?
Was ever woman in this humour won?
I’ll have her; but I will not keep her long.
What! I, that kill’d her husband and his father,
To take her in her heart’s extremest hate,
With curses in her mouth, tears in her eyes,
The bleeding witness of her hatred by;
Having God, her conscience, and these bars against me,
And I nothing to back my suit at all,
But the plain devil and dissembling looks,
And yet to win her, all the world to nothing!
Ha!
Hath she forgot already that brave prince,
Edward, her lord, whom I, some three months since,
Stabb’d in my angry mood at Tewksbury?

It is, in many ways, one of the most inexplicable scenes in all Shakespeare. Even Richard himself cannot believe it but we see it unfolding before our very eyes and every step is credible and believable.

It is not until later in the play, when Anne has long been dispatched and Richard is king and has decided to marry the daughter of the dead King Edward IV and Queen Elizabeth, his niece Elizabeth, that the scene falls into context.

The scene is brilliantly played by Ralph Feinnes and Aislin McGuckin. The Queen resists, naturally so, Richard has murdered both her sons and a number of her family members as well as his last wife. Richard uses all of his charm to convince her.

Say that the king, which may command, entreats.

Say, she shall be a high and mighty queen.

But eventually, he runs out of patience and screams at her.

And then to make his point absolutely clear, he throws her to the ground and rapes her.  This is what underlies Richard’s power over people: his unflinching use of power to bend  them to his will.

While much of Richard’s rise is through the naked and brutal exercise of force, he is also adept at the use of language to manipulate and subvert. However, he is not alone. In Act II, Scene i, the dying King Edward is endeavouring to reconcile members of this court. They are playing for time.  The King is dying, they are manoeuvring for position. 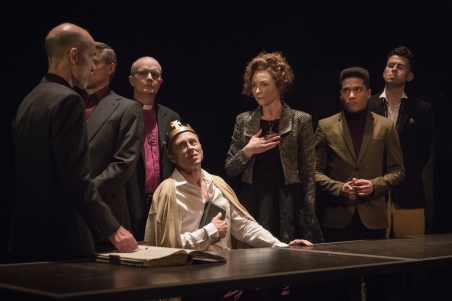 King Edward:  Since I have set my friends at peace on earth.
Rivers and Hastings, take each other’s hand;
Dissemble not your hatred, swear your love.

Rivers: By heaven, my heart is purged from grudging hate:
And with my hand I seal my true heart’s love.

Hastings: So thrive I, as I truly swear the like!

Queen Elizabeth: Here, Hastings; I will never more remember
Our former hatred, so thrive I and mine!

But then Richard comes on the scene and shows that when it comes to dissembling, he is in a class of his own.

Richard: Amongst this princely heap, if any here,
By false intelligence, or wrong surmise,
Hold me a foe;
If I unwittingly, or in my rage,
Have aught committed that is hardly borne
By any in this presence, I desire
To reconcile me to his friendly peace:
‘Tis death to me to be at enmity;
I hate it, and desire all good men’s love.
First, madam, I entreat true peace of you,
Which I will purchase with my duteous service;
Of you, my noble cousin Buckingham,
If ever any grudge were lodged between us;
Of you, Lord Rivers, and, Lord Grey, of you;
That without desert have frown’d on me;
Dukes, earls, lords, gentlemen; indeed, of all.
I do not know that Englishman alive
With whom my soul is any jot at odds
More than the infant that is born to-night
I thank my God for my humility.

On face value, this text could be played quite sincerely.  It takes a great actor like Ralph Fiennes to make it heavy with irony and sincerity.

It is this aspect of the play that underlines the play’s contemporary relevance.

In modern political life, it is common to find politicians saying one thing and meaning another or saying something that is often complete the opposite of what is true. In modern times, this is often mundane, trivial and beyond the moment of immediate outrage, forgettable.

But what Shakespeare has done in Richard III is immortalise the devious and murderous manoeuvrings of the consummate Machiavellian. This play is about Richard. His demonic energy is the central driving force of play. The other characters are simply minor planets that move in his orbit.

One of the central problems with this play is the dramatic relationship between Richard and the four main female characters: Queen Elizabeth wife of King Edward IV, Queen Margaret,  widow of King Henry VI, Cecily Neville, the Duchess of York, mother to Edward, Richard and Clarence, Lady Anne Neville, later Queen to King Richard III.   Confused? Well, it is confusing. Even if you know the play well and you know the period well, their exchanges with Richard are really difficult to follow.

All of them hate Richard with a passion and all of them spend quite a lot of play telling him so. Their reasons are many, varied and complicated. And their exchanges with Richard do not make great drama.

My other self, my counsel’s consistory,
My oracle, my prophet! My dear cousin,
I, like a child, will go by thy direction.

Indeed, Buckingham proves to be Richard’s most loyal lieutenant but he balks at assassinating the two young princes in the Tower to Richard’s immense displeasure.

When Richard reneges on promises made to him, Buckingham flees to join forces with Richmond who has returned to challenge Richard for the Crown.  Buckingham is captured by Richard, who shows his old friend no mercy and executes him.  Richard’s treatment of Buckingham demonstrates that nothing but complete subservience to Richard will ensure your safety. Anything else brings certain death.

In one of the final scenes of the play, Richard prepares to face Richmond’s army and the ghosts of all the people he has murdered appear before him to curse him and to pray for Richmond’s success.  It’s a telling scene, brilliantly played by Ralph Feinnes.

The wheel has come full circle, the King has been undone by his own hand.