One Nation senator Malcolm (77 votes) Roberts is yet to be convinced that climate change is real and is caused by humans. 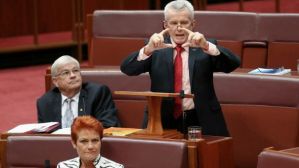 He has asked Chief Scientist Dr Alan Finkel to spell out his logic in asserting that human-induced carbon emissions have been rising since the start of the Industrial Age, that this causes global warming and that warming produces climate change.

It’s a disgrace that someone who was elected to the Senate with just 77 first preference votes can take up the time of Australia’s Chief Scientist and his staff with requests which he could answer for himself with 10 minutes on Google.

Sen Roberts should not be asking Australia’s chief scientist to run a personal toil for him on a topic that most Y12 schoolchildren are thoroughly conversant.

It’s time Roberts  stop flaunting his ignorance in public, made some effort to educate himself and stop wasting Parliament’s and the public’s time and money with his ridiculous requests.