Rogue One has burst onto our screens. For Star Wars fans, it will provide plenty of the same old same old.  The film reprises many of the old themes, scenes  and characters  (all played by different characters) from previous Star Wars films.

Goodies marching off to war to stirring music 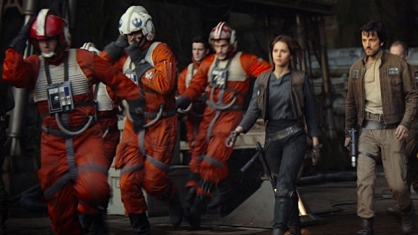 and lots of Storm Troopers, who all get zapped by the goodies.

It also provides completely new cast, all of whom are dead by the end of the film so as not to create any nasty continuity problems with the other sequels. 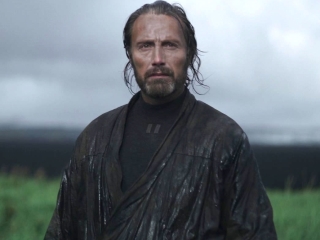 He’s going off to design the Death Star, albeit unwillingly. 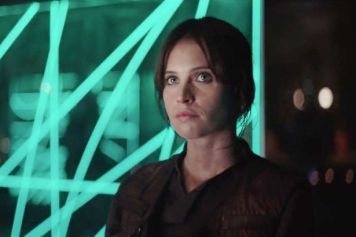 escapes, is imprisoned, escapes again,  visit a planet, escapes (just in time)  and then provides hope for the galaxy by transmitting the plans of the Death Star to the rebel alliance and then dies holding hands with her new love, Casein Andor (Diego Luna)

She has also helped by Saw Gerrera (Forest Whitaker). 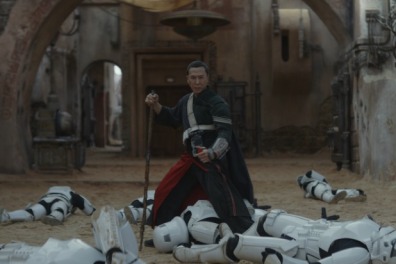 and Alan Tudyk as K-2SO

And that’s pretty much it.

Apart from a plot that creaks and groans its way through a series of monotonous action scenes and is filled with inconsistencies and anomalies.

Towards the end of the film, the rebel alliance is is attacking a planet which is naturally protected by a shield wall. The entire shield wall is held in place by a small switch on a console on a beach. Îmwe is killed after de-activating the master switch.  At the same time, the shield wall is being breached by a battle cruiser diving nose first through it.

A final scene with Darth Vader who appears and starts chopping people up and throwing them round appears to be completely pointless.

It’s all good fun for the fans but for the rest of us, its not terribly exciting and slightly boring.