If letter writers to The Age are any indication, then the Australian voter is not very impressed by Treasurer Scott Morrison’s recent conversion.

Mind you, it’s Economics 101. And as any film goer would tell you is no such thing as a good cop or bad cop, they’re all just cops. It’s the same with debt.

The realisation that Morrison seems to have come to, albeit rather late in life for a Treasurer, is that there is a difference between debt that funds infrastructure spending and debt that covers shortfalls in recurrent expenditure, again Economics 101.

But unfortunately it all rather simplistic. Not all infrastructure spending is necessarily good. Some of it is simply pork barrelling. One suspects that most of what Barnaby Joyce proposes falls into that category. And spending on recurrent expenditure such as education and health is important as an investment in the future, in the case of education, and often as preventative measure, in the case of health.

One wishes that the Australian electorate could have more confidence in its Treasurer. 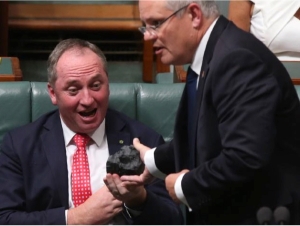 And its Deputy Prime Minister,