An article published in the New York Times indicates that only 36% of the sample of 1746 adults knows where North Korea is. It probably doesn’t matter unless some of the other 64% are actually sending the warships to positions off the coast of North Korea. You will see from the second map below that some people in the sample to North Korea is actually in Australia. Now from an Australian perspective and given the propensity of Trumpster to act somewhat precipitously, that is a worry.

And here’s the map by country 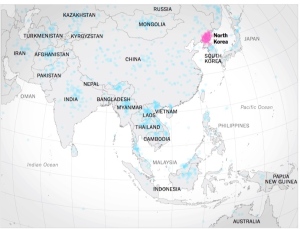 Now you have to remember that a good proportion population of the US believes that God created the earth in six days and that men and dinosaurs lived on the planet together 6000 years ago so this kind of stuff is probably to be expected but it’s still a bit scary, because they are all allowed vote.