Christopher Nolan”s Dunkirk is the story of the evacuation of British troops from Europe in 1940 after the German invasion of France. The evacuation was performed by by what came to be known as the little ships of Dunkirk, a flotilla of hundreds of merchant marine boats, fishing boats, pleasure craft, yachts, and lifeboats called into service from Britain for the emergency. (Wikipedia)

These small ships were able to get in close to the beach where the troops were stranded.  it was a most remarkable operation.  Rightly, the stuff of folklore and legend 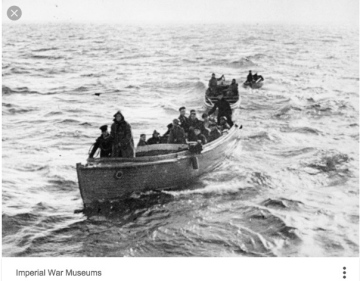 For people of my generation and particular their parents who live in Britain, Dunkirk is a very real experience and probably one that is lost on younger people today. But it was one in which Great Britain  stood on its own two feet, independent of France and importantly against Germany and survived.  And importantly, one that the old folk of Britain think that can be repeated.

Expect the cinemas of Britain to be packed out with old age pensioners.  The film has  great symbolic importance for the people who voted for Brexit.  At the heart of the anti-European sentiment that led to the huge demographic splitting in the vote on the European union was the memory of times like Dunkirk and the Blitz and the idea that somehow Great Britain can go it alone again.

So, the film is very timely piece of propaganda and also a piece of brilliant marketing. A bit like Shakespeare’s Henry V,  a nostalgic look at  time when Britain  considered itself a great nation.

I remember a history lecture in Auckland when I was an undergraduate. It was delivered by an American lecturer of German descent. He was lecturing on modern European history.

He said, “You must remember that it was the Russian sacrifices on the Eastern front that ultimately defeated Germany.

After that, it was involvement of American industrial might. Britain really played a minor role.”

He was lucky to avoid lynching. Britain had won the Second World War by defeating Germany during the Battle of Britain. We all knew that and Dunkirk had been the turning point. We have been taught that at school.

And now the theatres will  be filled with people who are also taught school.