Clive Palmer has secured an 18 month inquiry into potential benefits of an emissions grading scheme in return for letting the Direct Action climate change policy go through the Senate, something he promised he wouldn’t do. 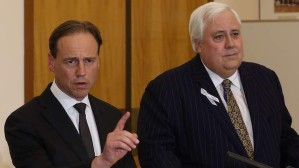 If Clive Palmer got such a good deal from Greg Hunt, why isn’t he looking happier?

That’s a great idea Clive, what we need is some more research and giving Bernie Fraser’s team 18 months to do it is also such a great idea. A good undergraduate student could knock this off a couple of weeks. 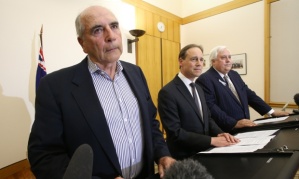 So in 18 months the inquiry is going to come back and say that emission training schemes work, they been working all round the world the last 15 years and they will work in Australia. But the government won’t be paying any attention

“It will never happen. This is not and will not be a carbon tax or an ETS. There is zero revenue in our scheme. We have no plans, no intention and no belief that that will change.”

The government is under no obligation to accept the recommendations of Frazer’s inquiry.  What they have effectively done is sidelined the issue for 18 months. The government line will be “We’ve commissioned an enquiry into the ETS. We are waiting on its findings.” In the meantime, the disastrously expensive Direct Action policy will be passed through the Senate.

The most depressing thing about Palmer’s latest backflip is that the Government now has the measure of this completely unpredictable and  irresolute politician. He has proved to be a hopeless negotiator and the government is running rings around him.

Expect more scenes like this as the Government effectively sidelines Clive Palmer.