Who chewed bits of string, and was early cut off in Dreadful agonies.

The Chief Defect of Henry King
Was chewing little bits of String.
At last he swallowed some which tied
Itself in ugly Knots inside.

Physicians of the Utmost Fame
Were called at once; but when they came
They answered, as they took their Fees,
“There is no Cure for this Disease.

“Henry will very soon be dead.”
His Parents stood about his Bed
Lamenting his Untimely Death,
When Henry, with his Latest Breath,

Cried, “Oh, my Friends, be warned by me,
That Breakfast, Dinner, Lunch, and Tea
Are all the Human Frame requires . . .”
With that, the Wretched Child expires. 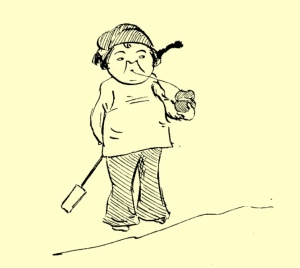