It’s important to understand how Lambie pitches her messages from Political La La Land. There is always a thin filament of logic that connects La La land messages to the real world. In this case of the paid leave scheme it is that the scheme disadvantages those on low wages (and in particular the unemployed although Lambie did not mention this). To extend this argument to say that to leave scheme will discourage people from having babies does not follow. To link it to eugenics is mischievous in the extreme. The only people who will be potentially discouraged from reproducing will be the unemployed, who currently receive $500 a week and under the paid parental leave scheme will receive nothing. That is certainly a disincentive. But that was not Lambie’s argument.

The dangerous thing about politicians like Lambie is that occasional and regular visitors to Political La La Land are unable to distinguish between the thin filament of rationality and the large pile of nonsense that is included in the utterings this self-styled inhabitant of the “underdog world.” (I know it has nothing to do with the discussion but I keep thinking “underworld dog” – Cerberus, tamed by Hercules in his 12th Labour and that this is somehow a metaphor for the task facing Leader of the Government in the Senate, Eric Abetz in dealing with the new Senate. But I digress). 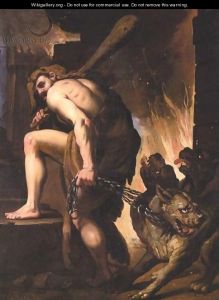 Hercules And Cerberus by Paolo Pagani.

One thing we can be certain is that PUP’s overdog, Clive Palmer, will probably not be happy with Lambie hogging be the media every time he has a nana nap.